Skip to content
Air HoistsHoistNow2017-09-21T20:12:30-04:00
We hope you love our content. Just so you know, if you buy something through our posts, we may get a small share of the sale. This help us with the site operating costs. Thanks. 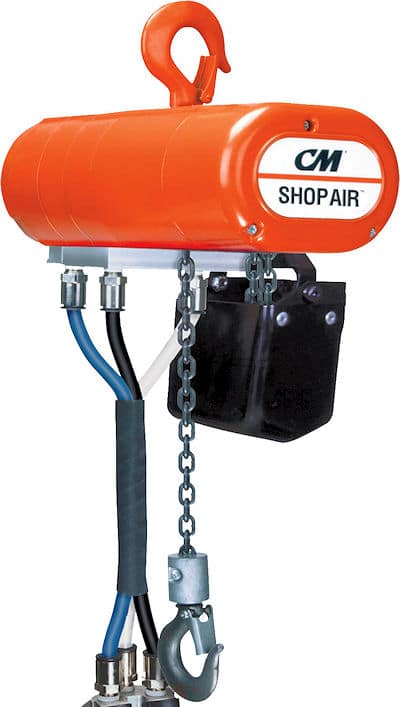 Air Hoists, also known as pneumatic hoists, are useful for jobs that require a reliable lift without the need for electricity. Their versatile variety of sizes, and the precise level of control offered by them, makes them the go-to lift for any job that needs a specialized touch. The fact that most air hoists do not require electricity to operate makes them ideal for out of the way or low tech jobs. Pneumatic hoists, which operate using air pressure differentials to move the chain or rope attached to the weight that is being lifted, allow for suspended movement of the piece. This is ideal for fine-tuning pieces of equipment before installation, and for moving items from one area to another smoothly. While most air hoists tend to lift slower than their electric counterparts, they are much easier to fine tune, and allow for more fragile pieces to be slowly raised to avoid putting too much stress on the object itself. The variety of sizes offered by air hoists, and the ability to reduce electric shock risk, makes them the ideal tool for explosion-sensitive work environments. A pneumatic hoist acts as a versatile lifter, allowing your work site to get the most use out of a single lifting device.

How Do Air Hoists Work?

Air-hoists function using air pressure to provide the force necessary to lift a load. While electric hoists depend on the power of an electric motor to move the load from one place to another, air hoists use differentiating air pressure to produce enough lift to move heavy objects. Due to the constant output and intake of air that allows the pneumatic system to operate, air-hoists are much less likely to overheat from extended use. However, the speed of the lift provided by air-hoists tends to be much slower than those of electric hoists, as the lift must depend on a start-stop process of airflow control in order to move the weight upwards using the chain or rope attached through the pulley system. Since this system requires some time to build up, an air-hoist is not as quick as an electric, but the careful pace allows for more control of the upward movement of the weight being lifted, which can be useful in cases where the stability of the object is more tenuous. The simple science that allows for an exchange in pressures to occur allows the air-hoist to come in a variety of types, from smaller scale lifts to specially designed equipment that minimizes mechanical friction to avoid generating sparks. These are incredibly useful in areas that require caution against igniting gasses.

As mentioned previously, air-hoists are less likely to cause electrical sparks, and can be created to avoid friction that could generate enough energy to ignite certain gases in fragile work environments. This makes them most useful in situations where there is an abundance of flammable gases, such as those produced by paint fumes, or in sensitive environments, such as laboratories, where even more strict control must be placed over all equipment used. The relatively easy air exchanged process that allows an air hoist to operate makes it ideal for cases where the location of the device may not allow it to be electrically powered, such as remote work areas. In cases where the hoist itself must be mobile, such as handicap-accessible lifts, the pneumatic system allows for the easy transportation of the device from one location to another without concern for battery life or electrical cords. The slow speed of the air-hoist allows for more delicate and precise control of the lifting speed and trajectory, allowing the user to control exactly where the object being lifted should go. This is incredibly useful in a factory setting where precision is key, such as the construction of fiberglass materials in the manufacturing of RVs. In these cases, the precision allowed by the air-hoist can help prevent damages to the fragile materials used in construction. Air-hoists can also be used in situations that electric hoists could be used in, depending on the weight of the project.

Finding the Right Hoist for the Job

While air-hoists can be made to fit into tight spaces, and take up less space than some electrical hoists, they do not have the same lifting speeds as electrical lifts. Since they require a buildup of pressure to achieve the same level of force as an electrical lift, they are unable to lift large loads at a quick speed. In cases that require more intense lifting power, such as large-scale construction work, an air-hoist can become impractical as it does not have the same power as an electrical lift. Air-hoists are useful in cases that require more precision controls, but they can be a bit jerky when it comes to the ascent of an object, as they rely on a transference of pressure. While air hoists tend to be slightly less expensive in the long run compared to electrical hoists, some jobs are too large for pneumatic pressure to handle them as well as its electrical counterpart. In these cases, it is important to research the limits of your hoist of choice, to make sure you are using the right tool for the job. It is important to practice safety habits when dealing with construction equipment of any kind, and hoists are no different. Deciding between rope or chain pulleys is also important, as this can affect the load limit of your hoist, and determine the size hoist system you need.

While air-hoists may seem less technologically advanced than their electric counterparts, they allow for a definite set of skills that can make them invaluable to your work site. The ability to control the finer aspects of the hoist itself, and provide detailed movement when raising and lowering an object, can be crucial to a job well done. Although they tend to be less heavy duty than their electric counterparts, air-hoists allow for projects to be lifted in areas that have no easy access to electricity, or that would be hindered by a battery or outlet system. Pneumatic hoists are indispensable in high-risk work sites that need to avoid generating any source of spark that may ignite flammable gases. They are also useful when it comes to lifting loads in restricted spaces, as they are easy to install and operate. When it comes to finding the right hoist for your space, make sure to look into the available options in the air-hoist department, as you may end up with an invaluable tool that makes your job lighter.